Do you enjoy indulging in decadent vegan desserts? Now you have the possibility to enjoy your own homemade cupcakes. After you get the Vegan Cupcakes Cookbook, you will have more vegan cupcake recipes. In no time, you will become the ultimate chef for cruelty-free treats.

Anyone can make dairy-free cupcakes that taste even better than the original ones. When you have these recipes at your fingertips, you will be able to cook the best vegan cupcakes for every day or some special occasions. Even non-vegans will fall for these delicious and creamy treats. You will love the spongy soft cupcakes, topped with the creamiest frostings. No one will believe that they are actually dairy-free and egg-free!

Vegan Cupcakes Hardcover Cookbook By Toni Rodriguez
Delicious And Dairy Free Recipes To Sweeten The Table $12.71 The List Price Was $16.99

Cupcakes are in high demand. They are no longer extravagances, but are present in our daily lives. The only problem is that bakeries offering these desserts don’t usually offer a vegan selection.
This cookbook fixes this issue by offering more than fifty vegan recipes to make at home. Some are simple while others are more elaborate, but all will satisfy even the toughest palates.
Toni Rodríguez’s recipes will surprise our guests, as the desserts’ flavor and color are equally attractive. The following are just some of the cupcake flavors included in this book:
– Chocolate and Banana
– Ice Latte with Caramel
– Piña Colada
– Strawberries and Cream
– Red Velvet
– Fig and Raspberry
– Ferrero Rocher
– And dozens more!
Vegan Cupcakes Hardcover Cookbook By Toni Rodriguez 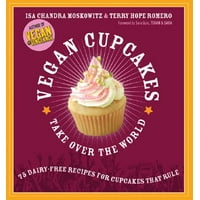 The authors of Veganomicon take on the cupcakes in this sweet and sassy guide to baking everyone’s favorite treat entirely clear of animal products. The hosts of the vegan cooking show The Post Punk Kitchen are back with a vengeance and this time, dessert. A companion volume to Vegan with a Vengeance, Vegan Cupcakes Take Over the World is a sweet and sassy guide to baking everyone’s favorite treat without using any animal products. This unique cookbook contains over 50 recipes for cupcakes and frostings some innovative, some classics with beautiful full color photographs.
Isa and Terry offer delicious, cheap, dairy-free, egg-free and vegan-friendly recipes like Classic Vanilla Cupcakes (with chocolate frosting), Crimson Velveteen Cupcakes (red velvet with creamy white frosting), Linzer Torte Cupcakes (hazelnut with raspberry and chocolate ganache), Chai Latte Cupcakes (with powdered sugar) and Banana Split Cupcakes (banana-chocolate chip-pineapple with fluffy frosting). Included also are gluten-free recipes, decorating tips, baking guidelines, vegan shopping advice, and Isa’s true cupcake anecdotes from the trenches. When Vegan Cupcakes Take Over the World, dessert lovers rejoice. Vegan legends Isa Chandra Moskowitz and Terry Romero offer vegan-friendly recipes for both classic and innovative cupcakes that dominate the baking world.

Vegan Cupcakes Take Over The World Cookbook On Walmart

Cupcakes Wall Calendar On Zazzle 20% Off With Code 50OFFTOPSALE 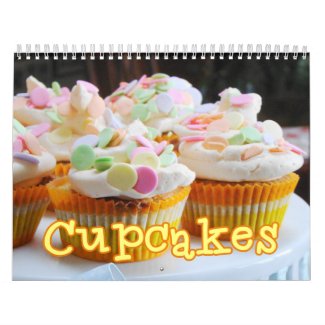 Categories
Interesting
Follow Me On Refind Get 20 Free Coins!