The Story Of Santa Claus

This is a Christmas story for children. The story is about Santa Claus who is also known as Saint Nicholas. This is a read aloud story video for kids. This video is on the Edewcate channel on YouTube.

Christmas is coming!! Lets learn about the story of Santa Claus.

The Story Of Santa Claus

There once lived a wealthy and rich man named Nicholas who lived in the North Pole. He was a kind generous man. Nicholas enjoyed surprising people and he often did things to make others happy. Nicholas had a special hobby. He would carve out pretty wooden toys in his free time but no one ever saw these toys.

It was Christmas time and Nicholas wanted to do something special for the children around him. While sitting in his chair one morning, he suddenly had an idea. Nicholas was going to carve many beautiful toys for all the little boys and girls’ Christmas presents. He would go climb up the chimney of all the houses and drop presents into the stockings that hung near the fireplace.

Late that night while everyone slept, Nicholas crept towards a nearby house and climbed to the top of the roof. He threw a toy into the chimney and quickly climbed back down. Nicholas did this to several houses but after some time he became tired.

He quickly went back to his house and pulled out his sleigh and tied them to his reindeer. NIcholas set back out into the snow and cold but not far long, his sleigh got stuck in the snow.

Nicholas was trying to pull the reindeer out of the snow when suddenly an angel appeared. The angel said “Nicholas you are a good man and I want to help you”.
The angel touched the reindeers and said “Now these reindeer are special, they will be able to fly.” The angel then waved her hand and a group of small elves appeared. They were dressed in green clothes, wore tall green hats and had long funny ears.

“They will deliver gifts, and bring happiness to many children. They are also fast, and will help you make all kinds of toys.”

Nicholas was in shock but was very very happy. Everyone got into the sleigh and with one shake of the ropes, the reindeer took off into the sky flying high to spread Christmas love and cheer. Nicholas said “Merry Christmas to all and to all a good night!”

The next morning the children woke up and ran to the fireplace. They pulled out the gifts from the stockings and screamed with joy! “Mommy someone magically put a gift in our stocking. It’s a beautiful toy!”

And that is the story of how Nicholas became Santa Claus. 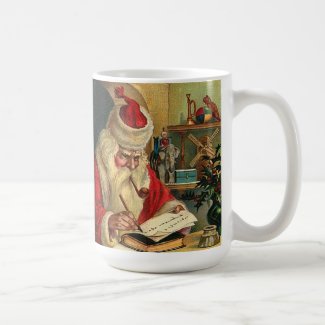