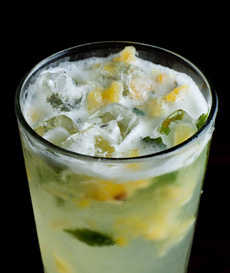 [4] Fresh pineapple makes a big difference. Use canned pineapple only as a last resort. Purchasing tip: Pineapples don’t ripen after they’re picked, so a pineapple from the store is ready to go (photo © Produce Marketing Guide).

July 11th is National Mojito Day, good weather for tossing down a refreshing drink of rum with lime, mint and sugar.

Pineapple was not part of the original recipe. Pineapple juice and coconut rum were added later, to variations that include the fruit-flavored Mojito recipes below.

If you don’t have either and you only want to buy one, go for the coconut rum; the pineapple juice will give you the pineapple hit.

2. POUR the contents into a 16-ounce glass. Garnish with fresh pineapple spear and/or leaf.

The mojito (mo-HEE-toe) is a quintessential Cuban cocktail.

The name derives from the African voodoo term mojo, to cast a small spell.

(Today the term is used as slang to refer to personal magnetism, charm, and/or sex appeal.)

According to Bacardi Rum, the drink can be traced to 1586, when Sir Francis Drake and his pirates* unsuccessfully attempted to sack Havana for its gold.

It was made with aguardiente, a crude forerunner of rum; plus sugar, lime and mint.

In 1862, when the Bacardi Company was established in Cuba, rum was substituted and the cocktail became known as a Mojito.

Aguardiente is still sold today. It is made by fermentation and distillation of sugared (cane) or sweet must made from fermented can juice. Other varieties are made with fermented fruit.

*Drake may have been a pirate, but the half-share of the booty he gave to Queen Elizabeth was an enormous contribution to her coffers. In 1580, for example, her portion of the treasure surpassed the rest of the Crown’s income for that entire year.

Source
The Mohito Recipes Are From The Nibble Blog
This is a link to the post on The Nibble Blog
http://blog.thenibble.com/2020/07/11/recipe-pineapple-mojito-for-national-mojito-day/