The Original King Cake Galette Des Rois, Epiphany Cake From The Nibble Blog And A King Cake Recipe From The Food Network
Three Kings Day T-Shirt 15% Off On Zazzle

This is a post from The Nibble Blog about Epiphany Cake

Epiphany, a Christian holiday celebrated on January 6th, marks the end of the Christmas season and the beginning of Carnival (which concludes with the beginning Lent).

January 6th, which is 12 days after Christmas in the Gregorian calendar, is also known as Twelfth Night.

It can get confusing to those not schooled in the tradition. Epiphany is also known as Three Kings Day, the Day of Kings and Feast Of The Kings (Fête des Rois in French). It’s the day that the Three Kings (les rois) appeared in Bethlehem bearing gifts for Baby Jesus.

And it’s celebrated with a special cake, Galette des Rois (Cake Of The Kings, a.k.a. King Cake).

How To Celebrate Epiphany

Epiphany is celebrated with parties for children and adults alike. Whatever the food served, the “must have” is a Galette Des Rois (photos #1 and #2), otherwise known as an Epiphany Cake.

The cake is a frangipane* tart. In France, people enjoy it throughout January, regardless of religious background.

Composed of two circles of puff pastry (pâte feuilleté) with frangipane (almond-enhanced pastry cream) in between, each cake comes with a hidden charm or other trinket, called a fève, or bean†, baked into it. A gold paper crown, provided by the baker, sits on top.

The person who gets the slice with the charm becomes “king” or “queen” for the day, and gets to wear the gold paper crown. But it’s an entailed honor: By tradition, the king or queen has to provide next year’s galette.

Most people head to the nearest French bakery to buy a Galette Des Rois.

But you can bake one: Here’s an Epiphany Cake recipe from the two-Michelin-star French chef Héléne Darroze.

The History Of Galette Des Rois

Hiding some type of token in food is a pre-Christian tradition, with roots in the Roman feast of Saturnalia‡. When the Church later instituted the Feast of The Epiphany to celebrate the arrival of the three wise kings, the tradition of the bean in the cake remained.

The Galette Des Rois as we know it first appeared in the 14th-century [source].

Before the custom of the gold paper crown emerged (probably in the 19th century), the cake was covered with a white napkin and carried into the dining room.

The tradition was adopted by other countries, to a more or less extent.

While traditionalists like the cakes in the photos, others bake outside the box.

Are you inspired to create your own Epiphany Cake? Traditional or not, January 6th is a day to celebrate with a good piece of cake.

Don’t eat sugar? Make a vegetable filling, like creamed spinach with a hint of nutmeg.

*WHAT IS FRANGIPANE? Frangipane is a dense pastry cream flavored with almond paste. The almond paste base is enriched with sugar, butter and eggs. (Alternatively, milk, sugar, flour, eggs and butter are mixed with ground almonds). It is related to marzipan, which also has a base of almond paste. A key difference is that frangipane is a spreadable cream, and marzipan is a semi-hard almond candy. 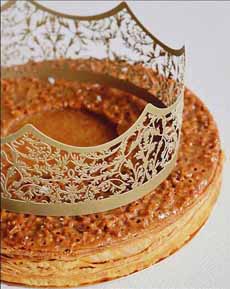 [1] Famed patissier Ladurée fills the puff pastry with almond cream, then garnishes the top with a confit of mandarin orange topped with a crunchy biscuit (cookie) of nougatine (almond croquant). 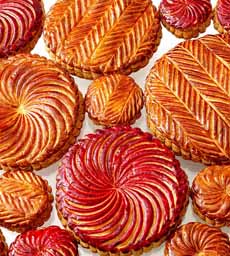 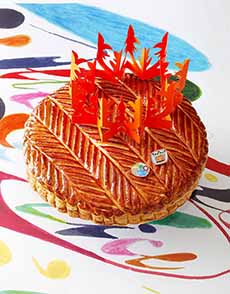 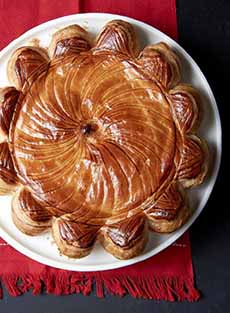 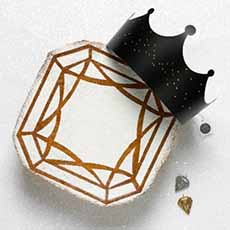 [5] After centuries of tradition, some pastry chefs are ready for a major change, like this “Crystal Cake” from French pâtissier Dalloyau. (photo © Dalloyau). 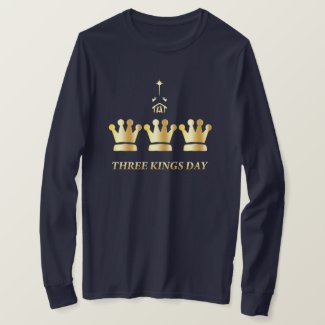