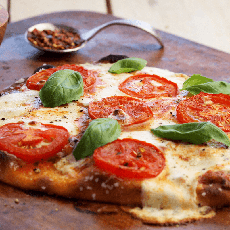 [1] A quickie pizza for breakfast uses ready-to-eat naan flatbread instead of a pizza crust. The recipe is below (photos #1, #2 and #4 © Frigo Cheese). 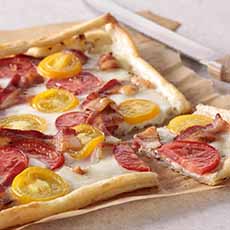 [2] Add bacon, breakfast sausage or other topping(s) to the pizza. 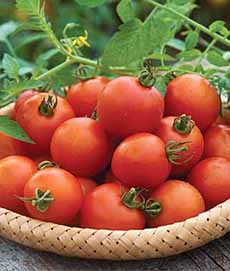 [3] Campari tomatoes are similar in size to plum tomatoes, but with a round rather than oval shape (photo © Burpee). 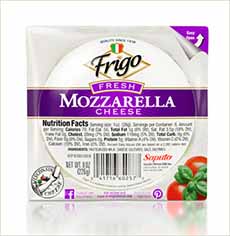 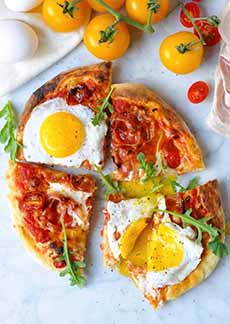 National Pizza Week begins the second Sunday in January, and you can start it off with pizza for breakfast— All of the pizza holidays are below; and check out these pizza statistics.

This is a speedy recipe because it switches out ready-to-heat-and-eat naan flatbfread instead of pizza dough. You can also use a small prebaked pizza crust.

> The different types of flatbread.

> The history of pizza.

Some breakfast pizza recipes are topped with an egg, and you’re welcome to do so here. We recommend frying the egg separately and adding it as a garnish. Otherwise, after the crust is golden and toppings are browned, crack two eggs over each naan. Return them to the oven and bake for another 2-4 minutes more, until the egg whites are set but the yolks are still runny (photo #5).

1. PREHEAT the oven to 400°F. Brush the naan flatbreads, bubbly side up, with the olive oil and sparingly season with salt. Then, place the naan on a sheet tray or pizza stone.

2. DIVIDE the marinara sauce and spread it over the tops of the naan. Top with the mozzarella and tomato slices. Add any additional pizza toppings, as desired.

3. PLACE the naan pizzas on the middle rack and cook for 10–15 minutes or until the mozzarella becomes melty and the crusts are golden brown.

4. REMOVE the pizzas from the oven and top them with the freshly ground black pepper, fresh basil and oregano. Slice and serve them with shredded Parmesan cheese and dried chili flakes.

THE YEAR IN PIZZA HOLIDAYS

Whether you get takeout pizza or make your own, mark your calendars for: